by Kicking The Bucket List With Meg on December 4, 2013

I realize that every passionate sports fan has a story about a team that they adore.   Me, it is a bit like Nationalism, and fate sometimes puts you where you live.  But I am a proud Packer fan.  I especially like NFL history and the story of how it all began.  The Packers first met The Giants in New York in 1928.  I want to give you a quick background on Packer fans so that you can better understand my visit. The Green Bay Packers have one of the most loyal fan bases in the NFL.  It is a fact and not fiction.    The season ticket waiting list in Green Bay is approximately 81,000.   It is common practice to birth your baby and get them on the wait list.

Tile at Lambeau for my Father. Thanks to my sister.

The tickets are literally willed to family members. This is how I got mine. My Dad put his name on the list in 1964.  Sadly, my Dad died before the year 2000 when his number came up, so to speak. Lambeau field has been sold out since 1960. 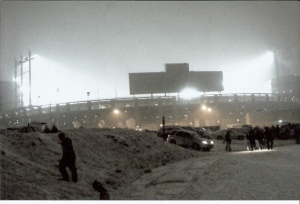 Lambeau field can be fun for the hearty type!

It is an outdoor stadium and they call it “The Frozen Tundra” for a reason. The fans are able to sit out in subzero temperatures and the stadium is full.  So compare this little town of 104,868 to other teams and in this instance the New York area.  Win or lose, Packer fans support their home team and love their franchise. The only team in the NFL that is owned by the fans, myself included.   There is that unique relationship with the team and the players, the fans travel in large numbers and they always have.

Fate did not keep me in Wisconsin. I love getting to Green Bay for the games.  I have a love-hate relationship with wanting to see the Packers play in every NFL stadium.  I think that much like travel it is enriching to see fans of other teams at their home stadiums.  However, some stadiums are friendlier than others.  I don’t think my skin is thick enough for some of the stadium visits so I have chosen a few which I hope to be fun. Hanging for a few days in New York City and seeing “The Pack” play on the field where the Super Bowl will be held was one fun bucket list adventure.

I LOVE flying into NY

I caught a cab from the airport to my hotel on 44th Street, and got caught up in a death threat that was clearly a foreseeable omen of the tight coverage that was going to happen in the game.   Apparently the professional cabbie knows how to cut people off, but this time irritated the wrong person.  An enraged man with a baby in a car seat wedged the cab into a spot, got out and made death threats.  Punches were thrown and the dude kicked the snot out of the cab; it was a bit frightening but also fairly comical.

By the time my shock wore off, I missed taking video. Nobody puts baby in the corner, and we made it to the hotel with a laugh and a story.

Welcome to the Big Apple Margaret!

Downtown New York is always a fun trip. A hotel with an amazing view of the city, great food, an Irish Pub and a walk in Central Park, I could have stayed downtown.

Now that is a room with a view!

But since this blog is about football, let’s get to the game. MetLife Stadium is located “out there” in Rutherford New Jersey, so it was best to move to a hotel near the stadium.  The view is more New Jersey with the city skyline and the stadium.  There is a busy road and no walkway so one should catch the shuttles that run to the stadium. 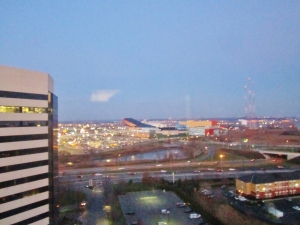 You can;t go wrong with this view either.

I went early to look around the stadium.

I love checking out food.   Everything from the famous Nathan’s Hot Dog, to the Food Network Stand, at MetLife, New York represented.  It was really fun to sit and eat in the cold outdoor stadium while the players warmed up.  I felt at home.   I kept thinking of Jimmy Hoffa under the field and call me morbid, I like that.   I guess a guy has to rest somewhere.  It just seems so New York.

There was an obvious Green Bay contingency watching the warm up.  I felt great about what was sure to be a Packer win. Both teams have a history of championships. Green Bay ranks #1 while the Giants rank #3.  The Packers met with the Giants during five Championships with the Packers winning four. The Packers had just won two straight games on the road but then there was an elite quarterback with a broken collarbone and a lot of talent sitting on the sidelines and the game moves off primetime. So that happened. 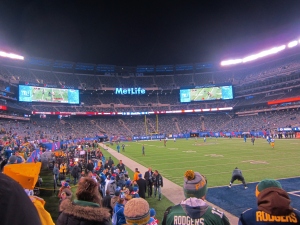 Off to a Big bang!

Let’s just say things went from bad to worse in the game. I had to listen to “Back in the New York Groove” a nauseating amount of times. The Packers played horribly and lost.  Crushed.  The Giants fans that I was with actually felt a bit bad that the game was so humiliating. Although it was the first in a series of shocking losses, that happens.  Someone always wins and someone loses.

For me, there was a loss on the field and then a loss from being somewhat disappointed by the losers who sat nearby and felt that they must make their superiority very well known. That sucks.    So having the gift of kind gab, I was able to tell a story which helped for a more civil time, for the rest of the miserable game.  Or they thought I was weird, I made friends.  I must say that overall, the fans around me were pretty great and wanted to learn where I came from.   I know that there are a few stadiums that would be miserable for an away game fan. I felt lucky that way.  I had fun.

Waiting in a freezing parking lot for the stuffed cattle like shuttles, with drunken people in my face doing the discount double check on a continuous loop kinda sucked.   I am accustomed to going to a stadium in a neighborhood where one can hang out near local restaurants, cars, food, beer and music, and then lollygag to your car when you so desire.  So this suck fest made me fall more deeply in love with my home town NFL stadium, where the atmosphere is more like a college town with a feeling of connection.

I had to wonder about difference in cultures.  Big city vs small town.  Could the difference be in the fear of losing season tickets that one will never be able to replace in this lifetime? Or perhaps where tourism as the number 1 industry in Wisconsin spills over into the stadium?   I am not naïve and know that there are idiots in Green Bay.  I have met the third kind.  Friendly banter can add to the fun of the experience but the world is changing, fans are getting beaten, stabbed and shot.  No longer the family friendly stadiums where people feel comfortable bringing he younger fan.  I worry that football in the U.S. could go the way of other International teams that have separate entrances and seating areas for fan safety. There is something to experiencing a loss in another stadium that makes me want to be welcoming to fans of other teams when they visit Green Bay.   I wish everyone could experience this.  I have learned in my aging years to be passionate but reasonable.

Megatips: See your sport in another stadium. MetLife is a pretty friendly place, go visit New York and take in some football.  Don’t ruin the fan experience for visitors.  Be an ambassador for your locale and welcome visitors.   Learn to operate your phone in order to film award winning altercations. Relax a little, we are all one people. 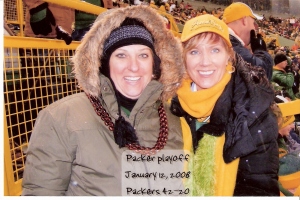