I am really fortunate to drive through beautiful Kentucky frequently.   The Kentucky Distillers Association formed the Kentucky Bourbon Trail in 1999.   With eight distillers’ to visit, this trail is done right.   Just this December of 2013, the Association welcomed Wilderness Trace to the trail making eight in total.   The websites are loaded with great information.[i]  This visit to Maker’s Mark was by far my favorite tour.

My husband is highly interested in bourbon, whiskey, whisky, stills, distillation, and overall production process.  I have gone along with him on many a spirits tour in both the U.S. and Europe. It sometimes gets complicated for me to follow.  I am not the Bourbonista and I let my technically minded husband listen.  I like to look at the awesome barrels, the flowers outside, the distillery store with the pretty bottles, and in this case, the amazing Kentucky people and countryside.  However, visiting all of the distilleries is now on Meg’s Bucket List. So fun!

Check out the details. Color and shape of bottles-Perfecto!

I can’t remember Jack but here is some of what I learned and will probably forget.   There is whiskey and there is Bourbon. Then, there is whiskey and whisky (that is for another blog).  All whiskey isn’t Bourbon but all Bourbon is Whiskey.  Then there is Kentucky Bourbon. Got that? Now that is just this Kentucky visit.  Add in a million factors like water, climate, barrels and words like mash, rye and barrel time and my mind wanders, I just want to know one thing, what gets you from 0-101 real fast?

Bourbon is America’s only “native spirit”, and 95% of it comes from Kentucky where historically the iron-free water filters through the geographically unique limestone, which to sum it up, some say is the deal.  There are principles and Federal rules which must be followed to make this fire water Bourbon.  It has to be: distilled from at least 51% corn, It has to be aged at least two years in *AMERICAN NEW, charred oak barrels (*shout reasoning-this is differs from whiskey distilleries in say Ireland, which I have visited where they buy barrels from KY), it has to be at least 80 proof, no additives, no flavor or coloring.  So clearly it is a healthy beverage.

Even when my mind wanders, I learn something new and mind expanding at each stop.   On this tour, one is shown everything from the grain delivery to the finished product. The place is immaculate, very well preserved with loads of history.  It gained a well deserved spot as a National Landmark in 1980.

I had to wonder if this may be partly due to funds that come with corporate ownership.   Maker’s Mark is corporate owned having been bought and sold a few times.  Currently owned by Beam, Inc., the award winning small batch production is still overseen by a member of the Samuels family, who bought the place for $35,000 in 1954.  Previously known as Burk’s Distillery, it is the oldest operating distillery in use and located in the state of Kentucky. It dates back to 1805.  Getting up there for this continent.

Visitors have come here since 1958.   The Quart House claims to be America’s oldest retail packaged liquor store and the grounds boasts the world’s only trapezoidal bridge*, 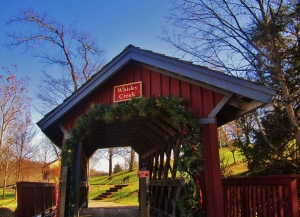 a fire house with a truck and The Distiller’s House. The original gristmill built in the 1800’s is still being used to house the roller mill which crushes the grains, huge cypress tubs full of sour mash and five story column still.     In 2002 when the production expanded it was done by replicating existing 19th century equipment.  If it ain’t broke, don’t fix it, I like that.  I like this saying that I saw on a sign: Maker’s Mark…“it is what it isn’t.” Simple.

The tour did a great job of highlighting the unique production of Maker’s Mark.  When Mr. Samuels bought the distillery, he threw out the recipe; and along with his wife, experimented with his recipe by baking bread made with barley corn and wheat combinations to get the exact recipe.  His only advice when he passed the distillery onto his son was; “Don’t screw up the whisky.”

I learned about the ingredients which start with pure limestone spring water that comes from an amazing spring fed lake on top of a hill located on the property giving calcium rich water important for the cooking grains and sour mash process.  Gentle winter wheat is used vs. rye.  The wheat is from farm’s that have been handpicked and have the same sort of limestone soil content as the springs at Maker’s Mark.   The red winter wheat allows the bourbon taste to sit forward on the palate of the tongue.

200 yr. old cypress tanks-You are able to touch and taste.

Cypress tanks some have 200 year old cypress woods.  These were used in the fermentation process before metal tanks. You get to stick your hands in the bubbling cauldron and taste.  (photo)

The barrels are highlighted as unique to Maker’s Mark.  Oddly, I was really interested in this subject, so hang with me while my guitar gently weeps.  Like a baby, the barrel maker’s must store their wood outside for a timeframe of nine months and unlike a baby, inclusive of one summer. The belief being that the bitterness in the tannins of the wood is decreased, critical to the character and flavor of the unique taste.  The barrels are then charred for 40 seconds which opens the pores in the wood and caramelizes the natural wood sugars.  At Maker’s Mark they taste often and the barrel tops are crafted to make frequent tasting easier.

The very unique barrels used for aging the Makers46 use 10 French Oak Staves and are charred more slowly.  46 is aged to taste and not for a specific amount of time.    Creamy. Perfected  so that it does a soft dance on your tongue. It is created from the original Maker’s Mark.  (maybe a pic)

The tour highlights; a bit of the grounds, the distillery house, the printing press where the labels are handmade, the bottling center, one of the many rick houses, the beautiful tasting rooms and of course finishes in the gift shop.

In this room, the guide gave a great crash course on tasting, describing where each spirit will land on your tongue.  I was blown away by how accurate this was.   They present a flight of four.  You begin with 1. Maker’s White, a one day old and clear. It is called “white dog” and is only for sale at the distillery.  2. Maker’s Mark full matured.  3. Maker’s Mark over matured.  4. Maker’s46 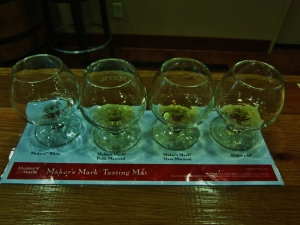 To me, the Makers 46 with deep notes of chocolate, cinnamon, and berry like taste, was bourbonarific.   Enlightenment never tasted so good. My purist husband preferred the classic Makers Mark.   Leaving the tasting room, they have a barrel tray with bourbon covered chocolate.   Perfection.

Lastly, the amazing gift shop.  It would be easy to make fun of a gift shop but it was really great. For the collection, my husband bought his own signed bottle and got a free lesson where he was able to dip his bottle in the signature red wax.

Other unique facts; Maker’s Mark has the youngest Master Distiller in the industry.  The red wax took a long time to develop and is melted at a high point of 350 degrees so that it can shelf.  Maker’s Mark is Whisky not whiskey.  One can become and Ambassador which gets your name on a barrel. Follow your barrel from beginning to finish. When it has matured you are able to purchase hootch from your barrel. Ambassadorship comes with a few other perks, what genius marketing. The barrels used once in production are sold on the free market.  In Scotland, 95% of their barrels are bought from U.S. bourbon makers.  While researching on you tube (true that), I learned that the practice of using staves is banned in Scotland,[i] The U.K. and much of Europe.  Explaining perhaps why The U.K. was the number 1 importer for Maker’s Mark.  For you architecture enthusiasts, there is a trapezoidal bridge in Indiana that also boasts to be the only one in the US.[ii]

Megatips; Just go here!  Being a dip is cool here-dip your own bottle for fun.  Do not plan to go boozcrusin, these roads wind quickly and are already lined with crosses.   Go there at Christmas time when the place is dressed up.  Make sure you have looked at route on your GPS. Take in the Ky countryside.  I give this place 5 megastars*****

Thanks to P.F.Leahy once again for the clever title of the post.

Tags: #Kentuckytourism, #Maker'sMark, #whisky
From: Bourbon, Bucket List, Kentucky Bourbon Trail, Travel
← “It’s not whether you get knocked down, it’s whether you get up.”-A Packer Girl travels for New York Giants vs Green Bay Packers
Chowing Down On Reindeer And Cherries-Kauppatori, Helsinki Finland →
2 Comments Post a comment