Just What Is A Runza? And, How I Hit a Home-Runza

Meandering MEGabite-A food travel story about my run into Runza of Lincoln, Nebraska.

This past week, I returned to Lincoln to see my son graduate from University of Nebraska College of Law. Not knowing if I would have the opportunity to return to this wonderful city, I quickly made a list of experiences that I wanted to have in Lincoln before I die; eating a Runza was way up high on my list. My son and his friends laughed when I told them about my Runza quest,  apparently this is a late night fast food stop for the kids. They made jokes about “runs,” if you get my drift. Laugh away little smarty-pants because this was one fantastic stop. I guess one either loves them or hates them and I LOVED my Runza moment!

Before I went to the fast food Runza restaurant, I read everything that I could on this delightful dish and my curiosity peaked at a feverish height. I had so many questions that needed answering. What is a Runza? Why had I never heard of this before? Was it like a pasty, an empanada,  or a stromboli?   How did this fast-food restaurant skyrocket to chain status of 80? Who are Volga Germans?

WTH IS A RUNZA?

The Runza Hut Restaurant opened in Lincoln, Nebraska in 1949. I was unable to find the exact origin of a word relating to Runza.  I did read a 2009 quote from the granddaughter of the founder who stated that “…. Also, my grandmother created the spelling of the name from the pronunciation used by her mother. She did not have an actual spelling, but spelled “Runza” the way her mother pronounced the word….”  [1] The term Runza is trademarked in the United States by The Runza Restaurant. Other names for the Runza include; cabbage sandwich, fleischkuche, and bieroch or bieroch, beerock, berrock, bierox, Nebraska beef buns, and kraut bierock. Check out this fact, the Bierocks of Kansas are generally baked in the shape of a round bun where the bierock/Runzas of Nebraska are shaped in a rectangle.

The original version was simple in theory; a Bierock/Runza is a doughy yeast bun filled with ground beef, cabbage, and onion. Of course, there are many variations and bastardized versions but this is the only way that I would want to eat the sandwich; at least on the first try, I am a purist that way.   Yes, it is slightly bland but a great way to meet and taste this ethnic dish. I was curious to see which version the kids tasted on their late night adventures, so checked with my son and his friends and indeed, they went for the Spicy Jack Runza filled with bacon, jalapenos, and spicy ranch dressing.

This is clearly, or not, the best photo that I could have taken. This is the Classic Runza after splitting into a half. 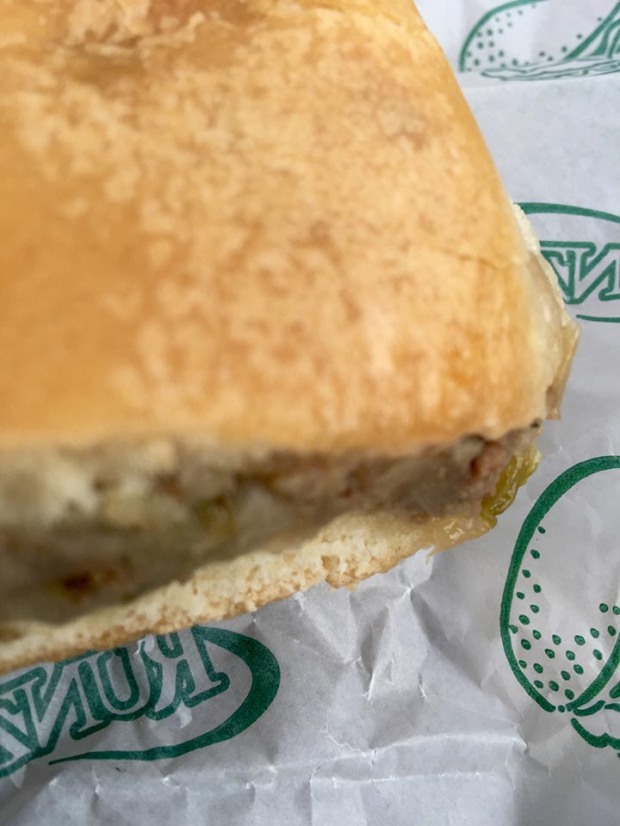 COOL FOOD HISTORY- WHY IS RUNZA SPECIFIC TO CERTAIN AREAS?

This sandwich made it to Nebraska by the way of a group of Germans who settled in Russia. The sandwich is said to have been a food staple carried in a cloth and put into pockets or a lunchbox. The dense sandwich retains heat and was eaten during the long days of the hard-working farmer. This dish was and is also served at family and community gatherings and in school cafeterias. It is said to be (mainly) a Midwest thing, so why hadn’t curious and well-traveled Meg ever tasted or heard of this fare?

Digging through blogs and Wikipedia, I learned that the radio slogan for Runza used to say “Food just like grandma used to make, which is true if your grandmother was a German peasant who once lived in Russia under Catherine the Great.”-John Wenz, The Awl [2] Funny, and this made me curious.

I Googled Volga Russians and learned that during the 18th and 19th century, groups of German farming people were recruited to settle an area along the River Volga region of Russia. They were to introduce superior and advanced German methods of farming to this area and in return, were granted the right to: maintain their language, to be exempt from military service, maintain their religious practices and so on. Over the years, various rights were changed, taxes needed to be paid after 1870 and for cultural and persecution reasons, waves of people left this area for different parts of the world, mainly United States, Canada, Argentina, and Brazil.

But why had I never remembered “meeting” any of these folks in my life?   I am fluent in genealogy.  I visited The German Heritage Museum in Davenport Iowa. I lived in Wisconsin, Saskatchewan, and Iowa.  Wisconsin once held the largest German population in the United States. In one small area of Wisconsin, many subgroups can be found, representing Germans from Schleswig-Holstein, Pomerania, Saxonia, Hanover, Hesse, Hunsrück, Baden, Bavaria and many other places

According to “Oshkosh First and Facts” –The Oshkosh Public Library, In 1899, a group of Russian-Germans settled near Oshkosh, Wisconsin (20 minutes from my hometown.) Beginning with about 4 families from Jagodnaja Poljana, Russia, by 1905 they grew to a number of 296. These families were tight-knit, spoke German and maintained their religious practice in the Zion Lutheran Church.  [3] Factory work was not their forte and families were lured to Nebraska, Dakotas, Saskatchewan, Colorado, Manitoba, and Kansas for free farmland. The south-central part of North Dakota was known as “the German-Russian triangle.”

OHHHH, so this is why I do not personally remember meeting this group of German peoples and this particular food. *Disclaimer, this is not to say that this sandwich in its pure form is not served somewhere in Wisconsin, Iowa or Saskatchewan. I simply have not come across it. I also checked with my like-minded food curious brother-in-law who has lived in Milwaukee his entire life and he has also never come across this version. Interestingly enough, I poured through a 1971 parish cookbook from my youth and I did find many German recipes along with a recipe called “Cheeseburger Turnovers.” Made without cabbage and with cheese added, it is quite similar in theory. 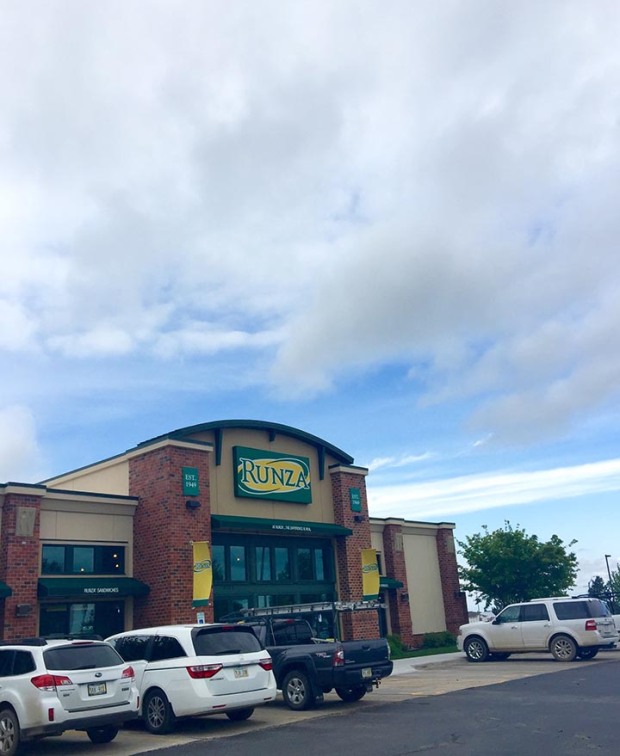 Runza is a fast food style restaurant named after this ethnic dish.

I was surprised to learn that they make the Runza’s fresh from scratch every day with quality ingredients such as 100% pure ground beef. They also make from scratch; double breaded onion rings, ranch dressing, French onion dip, made to order fresh and never frozen hamburgers with buns from a local Omaha bakery. Even the chili is made from scratch.

It was a long three days in Lincoln, waiting to taste the Runza, I went straight to the classic, no cheese. The bun had a nice golden slightly firm exterior and the interior was soft but somehow not soggy, the cabbage was surprisingly not overpowering. The perfect symphony of flavors and that fantastic made from scratch bun with its golden and buttery exterior. If I lived near a Runza Restaurant, I would be hooked.

MEGastars: I give this experience 5 MEGastars ***** I absolutely love a fantastic food travel story. *Kids, I assure you that the food caused no issues.  A few more random Runza facts below the recipe link.

[2] John Wenz, The Awl. In Search Of Lost Food, My Attempt To Make The Perfect Nebraska Runza.  This was a fun and well-written read about the authors attempt to recreate the Runza of his youth.

[4] Tips and Tricks for home made Bierocks in the Runza style. Source.