What could be more Kentucky than horses and bourbon?

I have beaten a path up and down I-65. From my home in Alabama to my family in Wisconsin, Kentucky is a great stopping point. Each time that I pass Louisville, I say someday I am going to actually spend some time I’m gonna be with you. On this trip, I gave myself 2 hours for a stop and visited my first “urban distillery.”   If you are a bourbon enthusiast, a history buff, or just looking for something interesting to do in Louisville, you too will be interested in this fun-filled historical bourbon tour.

Evan Williams is my Sixth stop on the KBT.  My husband is highly interested in a production process, of any type. In particular, he has had a long fascination with distillation, especially when it involves bourbon, whisky/whiskey. Over the years, I have gone along with him on many a spirits tour in and out of the U.S., and attempt to comprehend the technical jargon while my mind always wanders. The Kentucky Bourbon Trail has now also become my quest; I want to explore all of the stops.

Louisville Old and New-Even Williams (old) as reflected in the new.

Located minutes off of I-65, Parking was easy to find in nearby lots.  I was with a group of four on this tour and we were luckily able to secure tickets “on the spot” for a mid-week afternoon tour.

Welcome to Evan Williams. The window tiles were designed by Frank Lloyd Wright.

During my tour, I learned that the glass transom window tiles (above photo) were reportedly “made” by Frank Lloyd Wright.  Being a fan of the famous architect, I later dug into this story and could not substantiate  nor deny that claim. See below for what I did learn. FLW is an obsession of mine.

The friendly staff helped me get a stamp on my Kentucky bourbon Trail Passport. I learned that is a new “mobile passport,”  and they helped hook me up with the new age techno. How genius, I own at least 3 of the paper passports.   To get the mobile stamp for each visit, you must be inside the building. 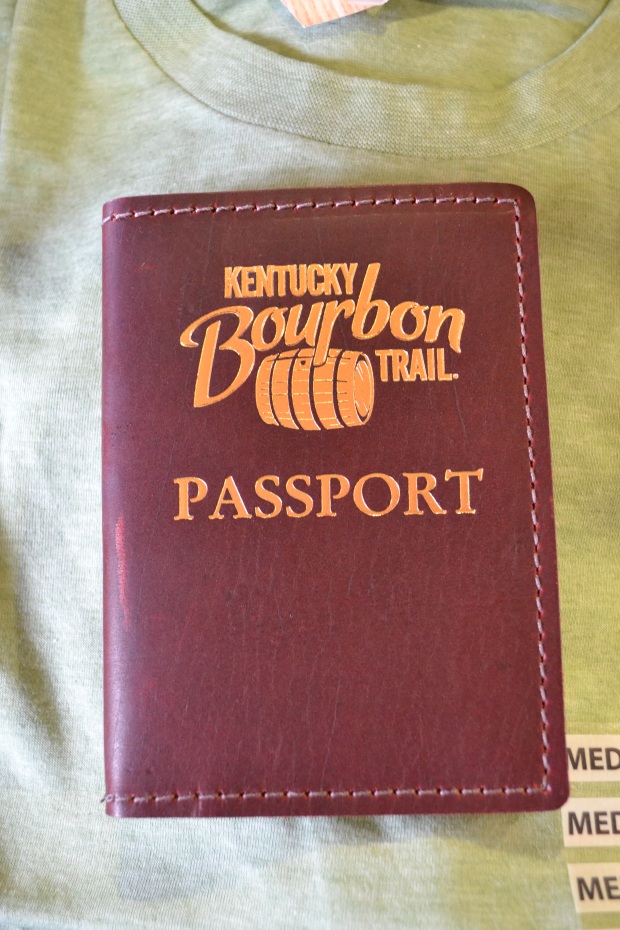 The interactive sensory experience began before the tour with this scratch-n-sniff bourbon barrel.

What aromas do you smell? And they pull you in with scent, sight, touch from the get-go.

The tour begins with a short film and moves fluidly into a room that reenacts the settlement of Louisville and business along the wharves. The actors in this film, skillfully portray the history and connection of bourbon to this area of the United States. I found this entertaining and the set makes you feel as if you are inside a 3-D story. 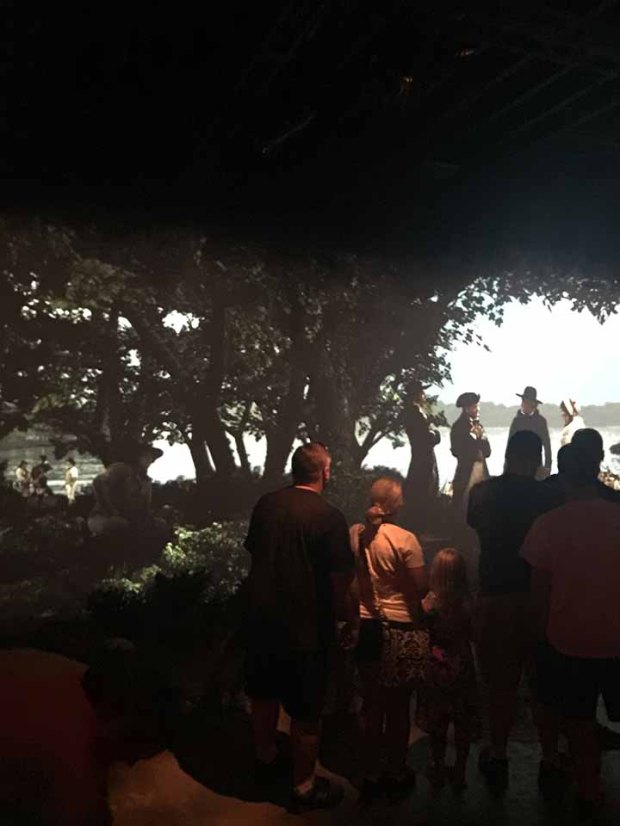 Stepping back to 1783 and the history of the bourbon trade in Louisville.

Moving into another theater, the story on screens surrounding the viewers, steering  towards a more modern distillation process.

A glimpse into the artisanal process. The day that I toured, it happened to be a rare “shut down day.” Meaning, repairs, inspections, and no hooch production before my eyes. 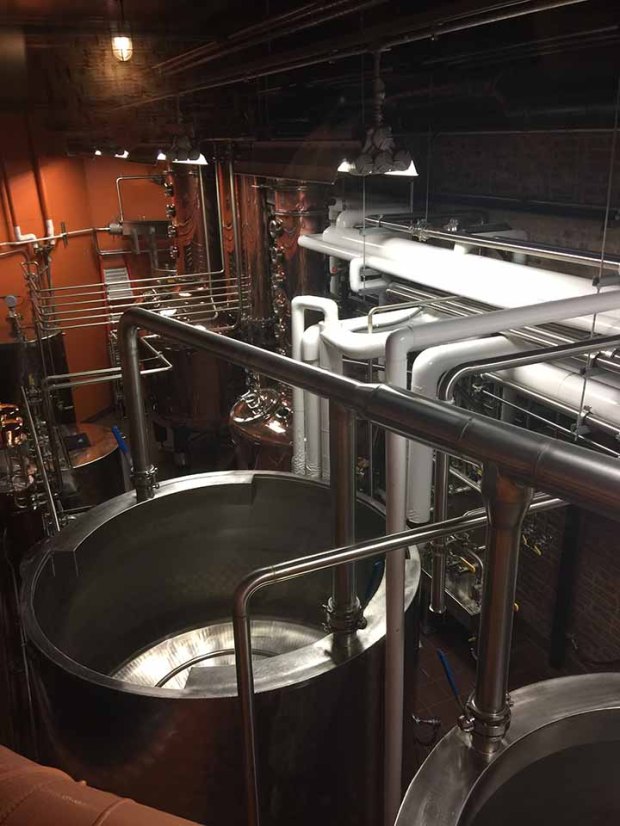 Evan Williams-it happened to be a rare “shut down day.” Meaning, repairs, inspections, and no hootch.

The second floor travels along Whiskey Row from its heyday through the eras of prohibition and The Great Depression.  This floor features a “miniature Louisville Main Street,” meant to take the participant into this time period.

Although the original distillery was located just across the street and along the riverfront, this replica gives a nod to one of the tenants of 528 Main Street, The Hollenbach Company. Founded by Phillip Hollenbach, a German immigrant turned major player in the Louisville Whiskey Row wholesale liquor business.  The Great Depression interrupted this success story.  The storefront is pictured above. 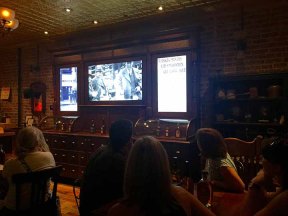 The tasting room at Evan Williams​

It is said that Mr. Hollenbach made a comeback after The Prohibition.

A highlight to any of the bourbon tours is the tasting room. This tasting room is set in an old-style saloon. Once seated, a film brings the viewer through this time period and into the founding of Heaven Hill in 1934 by five Shapiro brothers.

The tasting room lives up to the multi-million dollar expectations. The whisky samples are set up ahead of time and hidden out of sight. Once the film ends, the tables open up to the hidden samples.

Secret compartments in the tables and bar areas

The knowledgeable tour guides expertly led the sample tasting of the premier bourbons.

Evan Williams Black, Evan Williams Single Barrel, and Elijah Craig  were tasted on this day. Elijah Craig is a Heaven Hill Company small-batch and award-winning craft whiskey. Described as a taste to keep in your mouth forever, this whiskey is named after Rev. Elijah wood who discovered that whiskey tasted good when stored in a charred barrel.

I have to say that I no longer drink whiskey.  I did taste the bourbons and thought that they were some of my favorite.  The others in my group had mixed reviews from love to “o.k.”

Leaving the tasting room, I passed by this 1960’S era Max and Harry’s Bar that was decorated to a “T” with everything 60’s. Groovy! While writing this blog, I learned that one can actually rent out these rooms for dinners or cocktail parties.

Of course, the bourbon tour ended in the well-appointed shop. From hooch to bourbon pie plates, whiskey stones, and clothing, Even the “o.k. opinionated person” from my group,  left with some goodies.

Me, I was happy to look at the Special Archives Collection and the top half of that big pour. 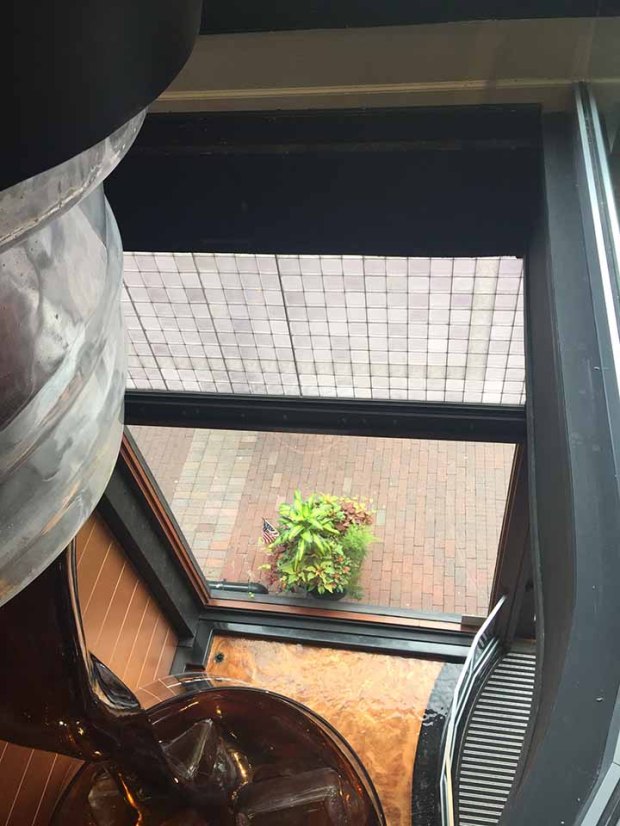 Nice Tour!  MEGastars 4****  The other’s in my group felt it was low on the distillation information.  More on Frank Lloyd Wright and those windows below MEGatips.

Frank Lloyd Wright and those transom windows. In 1897, FLW designed and was given a patent for 41 prism tile designs. Of the 41 designs, there was one style manufactured under the name of Luxfer tiles and manufactured by the American Luxfer Prism Company. Because the use of electric lighting was not widely developed during this period, these tiles were creatively designed to bend the sunlight inward and upward, pouring light onto the ceilings and walls, and not only to the floor of the storefront. This design helped the young architect fund his new home studio. [1] [2] [3]  Just looking at a close-up of my photos, I see the darker colored tiles do look like they may be this design.  *To note,  I did find one source citing that the transom windows on this façade were made of “Rookwood pottery tiles and glass tiles designed by Frank Lloyd Wright.” This variation of the Frank Lloyd Wright link seems more accurate to me. [4]