Just when I thought my days of touring the ten Kentucky distilleries on The Kentucky Bourbon Trail (KBT) were winding down; I learned that there are now eleven Craft Bourbon Distillery Tours that have been added to the KBT.   With a new passport to stamp, Willett Distillery was my introductory visit to a craft distillery on The Kentucky Bourbon Trail Craft Tour {TKBCT.}  I can now say that I am the crafty type.

The countryside of Kentucky is one of the great by-ways in the U.S.A.  Located about 20 miles off of I-65, the road to Willett leads through the quintessential rolling hills of Kentucky, past other distilleries; Jim Beam, Four Roses, and Heaven Hill.  There is nothing more peaceful than getting off the hectic interstate, if even for a few hours, and relaxing in the Kentucky countryside.

I have a thing for these Irish style stacked fences! Willett Entrance

This new trail was established to highlight some of the smaller family-owned artisanal distilleries. Generally, these distilleries are producing small batches of bourbon and proudly welcome visitors sharing their love of Kentucky’s liquid gold. 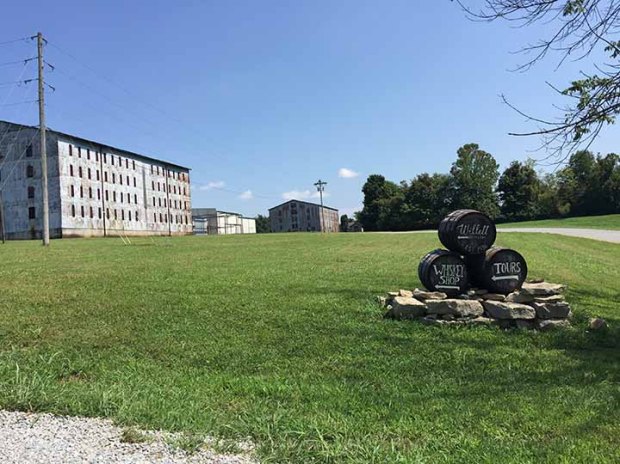 Later during the tour, I learned that although this distillery has grown leaps and bounds, it is not large enough to be on the KBT and no longer small enough to be considered a craft distillery.  The Kentucky Bourbon Trail  (Distiller’s Association.) has allowed this family run, independently owned distillery to remain on the tour.

The tour begins at the shop on the grounds of Willett property.  To note, there was a lot of construction and restoration happening on the property.  In the future, there will be a new visitor center, tasting room,  meeting and event rooms, two Bed and Breakfast buildings, a new gristmill, and open air patio overlooking a small lake fed by Kentucky springs.

The staff was so friendly, personable and accommodating, I was able to jump into a tour that had just begun and we became a group of three people.

Once inside this beautifully restored limestone building, 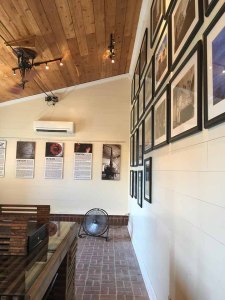 I learned that since 1936, this family has been making bourbon.  However, their family dynasty traces back 150 years and this fifth generation has a master distiller by the name of Drew Kulsveen, who is one of the youngest experts in the field. 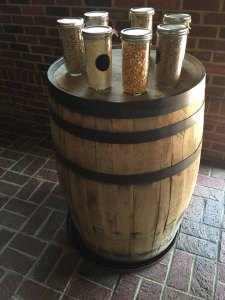 A brief introduction to the types of grains used in the Willette process.

The large tanks begin to cook down the grains.

And this is generally where my mind starts to wander.  However, I am able to peer into the mash tanks.  I love this room.  It has a great scent and somehow I am always mesmerized by the bubblin brew. Simple girl

I think that it looks like a lunar scene

lunar images or mash at Willette?

This room holds nine cookers and is light-filled. through the windows,

However,  I find it difficult for me to concentrate on the process when there is this beauty to wonder about.

The Pot Still at Willette

Not only do they have a young master distiller, they have an inventive one.  We learned that the distiller drew this design concept on a napkin and worked with the Kentucky Vendome Company to make his dream come to fruition. 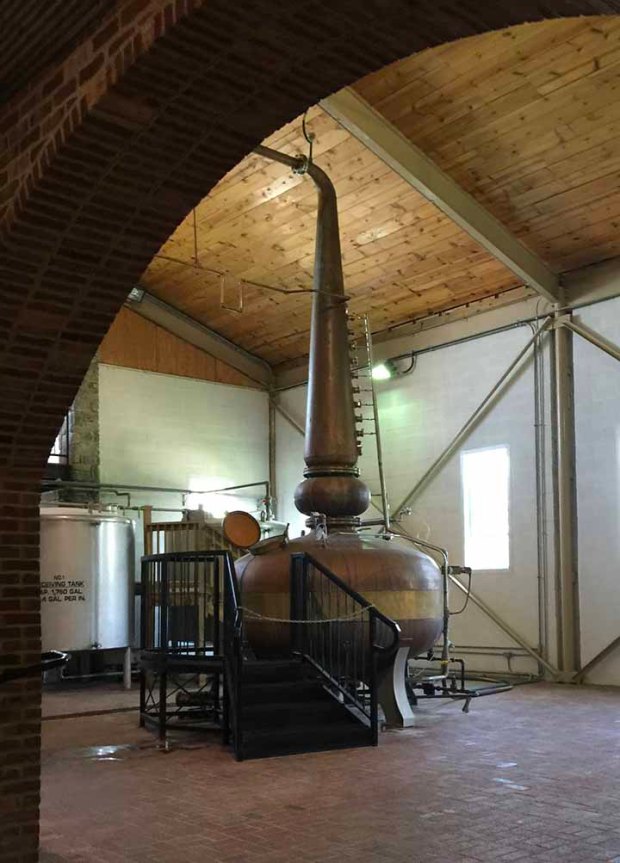 Because this copper still design was so unique Master Distiller Drew Kulsveen owns the patent to this still. 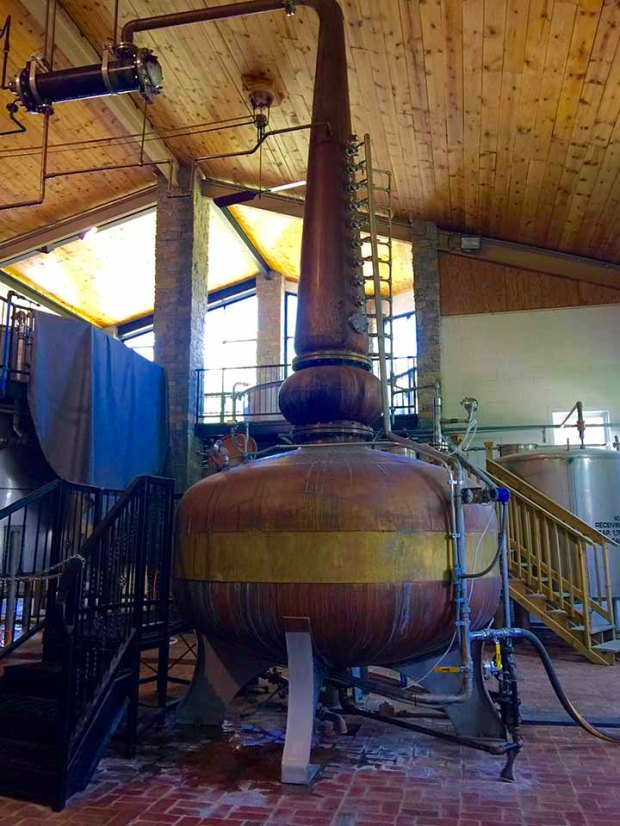 After the pot still it goes to heads and tails tank and the whiskey tank. The heads and tails are separated and are mixed back with the initial process for the next batch.

Heads and Tails and Whiskey  Tanks at Willette Distillery

And the tour group leader explains the measurements and the science and my mind wanders to the next step. The barrelling room.

Located in another building, it reminded of an old barn with treasures.  They just retired the old fashioned nozzle and upgraded to a modern version.  The old relics are hanging on the walls.  However, since the 1930’s, they still use this old-school scale.

The weight Scale at Willette in use since the 1930’s

Each barrel is weighed, measured, and labeled for tax purposes and records.

At Willett this is still done the old-fashioned way; a Sharpie and a stencil.  After this has been completed the barrels are literally rolled to one of eight rackhouses on the property. 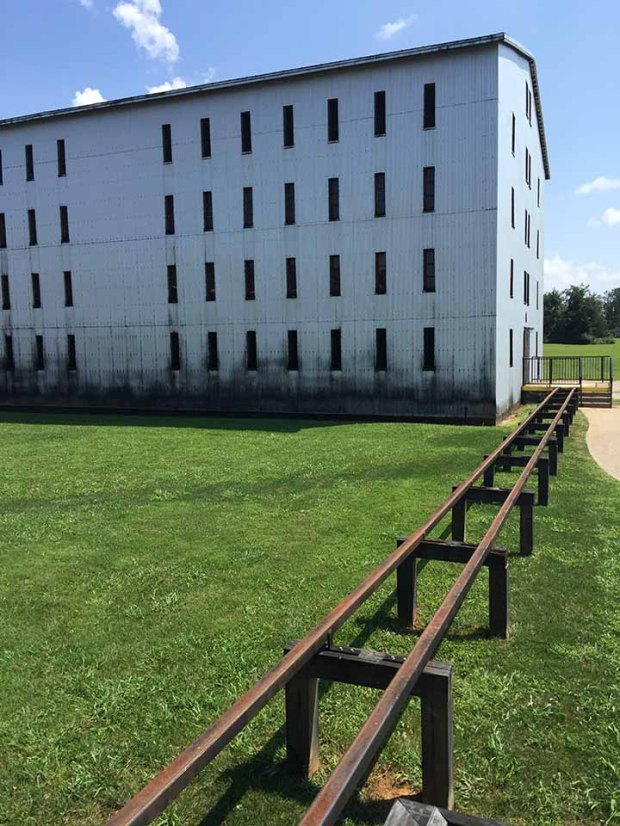 Roller to the Rackhouse

If this Rackhouse is full, the barrels are trucked to another on the property.   These rooms are my favorite part of any distillery.

One of the Rackhouses at Willette Distillery.

Dang, it smells good in this place!

Of course, this is where the “wait game” begins and the magic happens.

On this tour, it was this scene that really caught my attention and curiosity. I thought these hanging “things” looked like bodies or ghosts.  In fact, I see an orb in this photo and probably could start  a rumor.

However, we learned that a renowned chef is experimenting with curing ham using the “Angel’s Share.” The angel’s share is the term used to describe the alcohol that escapes during the aging process.  We were told that the ham can be aged anywhere from 6 months up to three years. 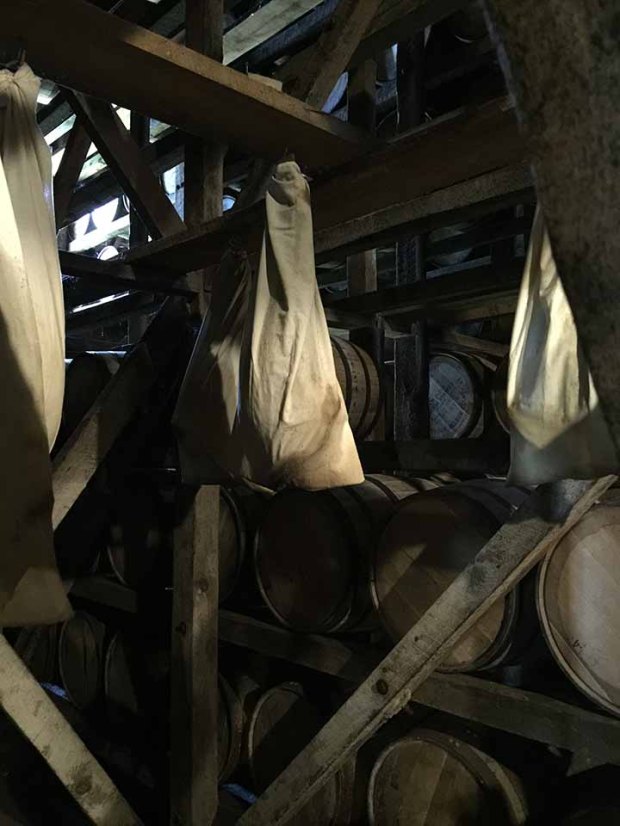 I was extra curious since I have been trying to eat each dish on Tourism Alabama’s 100 Dishes To Eat In Alabama Before You Die.  While eating at James Beard Award  Winning Highland’s Bar and Grill Of Birmingham Alabama and Jim and Nick’s  (Alabama quality chain.)  I  became more keenly aware of heritage pigs, humane farming, historical ham preservation, and curing methods.

When I returned home, I dug into this story. I learned that Chef Sean Brock is behind these hams. He is a chef who is passionate about local and regional foods and likes to make on exclamation point with the regional term Southern. Co-owner of the successful HUSK restaurant, located in Charleston S.C., and now Nashville Tennessee.   This chef  and the restaurants are the recipients of many awards and accolades; Chef Sean has also been featured on various television shows. His cookbook “Heritage “ was the 2015 James Beard Foundation Book Award for “American Cooking.”

I  would love to taste this ham when finished, I bet it will be amazing.  I am putting HUSK on my list for a visit in the future.   But I digress, this is about bourbon.

The master distiller takes samples from time to time and once aged to his perfection, the bourbons are bottled and ready for tasting.  And, speaking of samples, the tour finished in the visitor’s center.  Because the tasting room was being re-done,  there was a small bar area set up.  The tour leader went through each of the bourbon characteristics.

For the tasting, there were 7 products and one can choose to taste from two products. This link provides further information from the experts on the overview, tasting notes, the story and the numerous awards.

Possibly the thing that I will remember about this tour is the unique copper still and the bottle created  by artisans in Italy.

This Willette Straight Bourbon bottle was handcrafted in Italy to emulate that the copper still.

The historic buildings on the grounds are and will be fantastic. The setting is picturesque.   I for sure want to see this place when the renovation is completed.  This tour is more intimate than those at a larger scale facility and that will appeal to many.  The family has attention to detail and pride in their craftsmanship.   I give this tour 5 MEGastars *****