Posts from the ‘Travel Germany’ Category

Ten Reasons That German Food Is Not Just Weiner Art

Tasty Tuesday MEGabite is about fun food and places from my 2015 Germany trip.   If you have read my blogs, you know that I am in love with Germany. I like everything about visiting this fantastic country. Food is no exception. I had a blast trying some new foods, fun places and twists on some of my favorite all time foods.   Although I did include a few traditional German foods, this is not a post about traditional German foods.   My list is in no particular order and I offer a few tips and opinions. 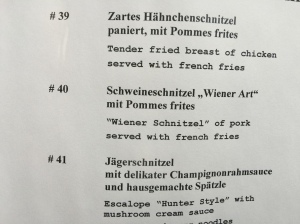 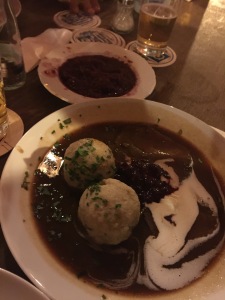 2. Pikeperch is neither Pike nor Perch. It is named Zander fish. I learned about this fish on this very trip. It is also not a hybrid fish. Shaped like a pike, it is more related to a perch. I learned that this fish is common in Western Eurasia.   In Europe, a second species is found in Southern Russia and the basin of the Danube.   It is listed as one of “The Dirty Dozen” in the U.K., threatening to wipe out native species.   I was lucky enough to taste this tender white,flakey, low boned delicious fish. Thank you Germany!

*Weird Zander Fact. In 2009, a Swiss Zander attacked tourists, sending them to the Emergency Room. The fish was later caught and cooked up by a local chef.

Found this beauty at Farmer’s Market in Munich. Eating at Germany’s largest market was a HUGE stroke of luck for me.  I was able to sample Bavaria’s finest foods.

3. A Salmon Trout is more like a Labradoodle.  This was a learning food for me.  I learned that t is a hybrid fish. It looks more like a trout with a mild salmon taste. Really delicious. I loved it! It’s caviar is also sold. I did not try this, but in the future, I sure will. Eating salmon trout in an Oktoberfest tent, is one heck of a bucket list treat. 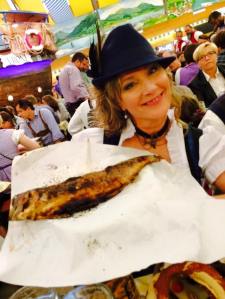 Meg and her trout salmon

4. Cheese– I am a bit of a cheese lover. There is not one German cheese that I tasted that did not exceed my expectations. I ate cheese every single day and passed up meal dishes in lieu of tasting different cheeses. I am a Wisconsin girl, home to the dairy state and many award winning cheeses, some having been ‘invented’ in that state. One example, being Colby cheese. Oddly, I have no photos of any of my cheese plates. Trust me, YUM!

5. Kaiserschmarrn is technically an Austrian main meal or dessert. “Kaiser” means Emperor and “Schmarrn” means mess/mishmash. Mine was served with homemade applesauce. RUKM? Eating this baby while sipping German Riesling at the Zugspitze on tip top of Germany, with a view and in good company is unbeatable. I included other foods tried at my table.  Great spot.  With over four restaurants to choose from, we did very well.  A lunch that will remain in my memory.

White sausages with mustard and pretzels

6. Traditional German Food at a restaurant.    By far, my favorite German meal was on my past trip to Germany where I stumbled upon some type of neighborhood park where they had a beer garden, food trucks and beer. 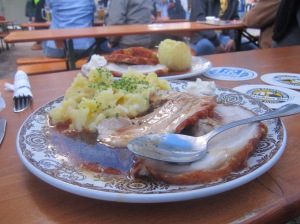 blast from the past throwback Tasty Tuesday

On this trip, and since eating game is new again, I ate a venison dish with noodle and red cabbage at Wolpertingers in Garmisch. The setting was idyllic with live music and a well decorated atmosphere. Mischa and Anetta were the consummate hosts. The portions of their made to order dishes were huge. I didn’t have to eat for days after finishing a portion of my dinner.

Totally moving to Europe. What a fantastic setting.

7. Traditional German food at Oktoberfest– Of course, the Oktoberfest tent is the real deal and this checking off this bucket list was the reason for the whole trip.  I chose a cheeseboard and the piketrout.

8. Traditional German Food at Augistiner– Grab a friend or two or three and eat at one of Munich’s beer halls.   Because I was with a group, we were lucky to get a table during this busy Oktoberfest Saturday night.  The Augustiner Braustuben is listed in the top 7 beer halls of Munich, this location is an indoor hall vs Augustiner Keller.   I think I now have visited all 7 beer halls. You are able to see the busy guy at the big keg.

Chicken for the masses.

Big pour at The Augustiner Brewery from a previous visit


9. “Street food.” On the street, in the gas station/large rest stops, grocery stores and market foods.   I have no idea why but these are my favorite places to eat in Europe. Munich excels in this arena. I can find amazing gourmet foods, pick and choose my dishes and amounts for a great price. Here are a few of my favorites.

yes from the gas station

at the gas station

Pretzel with cream cheese and veggie sandwich on perfect bread/brot

10. Food with a view.  Check out the reflection in this restaurant window. This stop was Partnachalm.   It is a little restaurant reached after hiking through some of the most beautiful meadows, mountains, gorges, streams and hills.  it is a place to sit and enjoy the view while having a bite to eat. 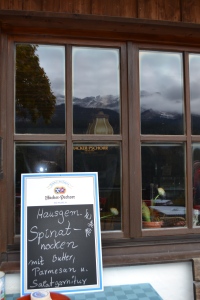 Check out this view 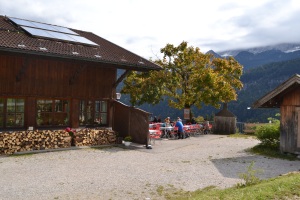